As I sit down to write, it is cold and rainy outside -- it fits the mood of my topic.

Last week I went to Auschwitz with a group of 11th and 12th graders and my fellow teachers. History is a hobby of mine. I have studied both world wars, and I am familiar with the Holocaust. I know enough about Auschwitz that I needed  to visit the former concentration camp. Some things you do, not because it is fun, but because you should. It is about the Jewish people but also bigger than any one race or nation.  The Nazi's perfected genocide, but there were others. Russia’s regime under Stalin killed far more people, yet the immediate aftermath of those killings was not exposed.  We do not generally speak of Stalin in the same way as Hitler -- history is indeed written by the conquerors.

More beside Stalin could be mentioned here. History is filled with such abuse of power and of people, but I digress.

I want to focus on what happened in the Holocaust,: the aftermath and what we as Christians have to say about it. As fair warning, if you are sensitive to such details, skip to the end, what I am writing needs to be said but is not for everyone.

Skip this section if you would like to avoid some of the more difficult details of the trip to Auschwitz.

We stayed in Krakow and drove to Auschwitz early that morning. It was to be a long day. We started at Auschwitz 1, the head camp. The students were tired but somber, and anyone who has ever traveled with 40 to 50 teenagers knows there will usually be laughing and joking among them but not today. We entered through the main gate to the camp and saw the sign 'Arbeit Macht Frei', which means ‘work makes free.’  It is a mockery -- there was no hope of freedom. A few survived, but they were liberated by Allied troops. One did not escape Auschwitz.

Most know of the Holocaust, but here are a few details:

In 1942, the Nazi regime set in motion a plan to eliminate the Jewish population in Europe.  From 1942 to 1944, the Nazi's managed to murder approximately 6 million of the 9 to 12 million Jews in Europe. The ones who were not immediately killed in gas chambers faced medical experimentation without pain killers, psychological torture, and inhuman living conditions. Auschwitz 1 is where many of these abuses occurred. Dr. Mengle, dubbed the Angel of Death, experimented here, among others.

Auschwitz 1 is a memorial to the Holocaust; it tells the story of those killed there. The Jews were told to bring their most valuable possessions, and rooms at the camp are filled with valuables left when the camp was taken.  It is sobering. Shoes, brushes, pots, and pans are some of the things we saw.

The worst for us was the room full of human hair the Nazis used to make horse blankets.  My daughter, Lydia, had to leave the room so she wouldn't throw up. I stayed and just stared, as did many of the students. It was numbing. There was, quite literally, over a ton of hair. If you looked closely, you saw the curls and the variations in color of the women murdered.

We entered Auschwitz 2, also called Birkenau, where the trains entered the camps.  Prisoners traveled 2 to 4 days confined without food or water. They arrived and were processed. Able-bodied men and some women were sent to the camp. Almost all children and elderly, along with the adults not deemed fit for the camp -- roughly 75 percent of all prisoners -- went directly to the gas chambers. They were nasty from the trip. They weren't even allowed to go to the bathroom. When told they were going to the showers, they believed it.  There, they were forced to strip nude and enter the showers, male and female alike. The doors closed as nearly 1,000 were gassed at a time.

Long hair was cut, gold fillings were pulled, and they were cremated. The Nazis made money running the camps. They looted these people to fuel their war machine.

The 25 percent that survived were not  the lucky ones. Conditions at the camp defied imagination. I will not go into them now.

Resume reading here if you skipped the previous section.

Next, I will discuss two Auschwitz survivors. The first we met in Krakow the next day.  She told how her  parents hid her with others before they were killed. She told how she survived, how she searched for her parents story because nothing was written. She had to research to even know who they were.

She took a number of questions from the students, and one of my students asked a bold question: had she had forgiven the people who killed her parents and destroyed so many lives? The woman didn't even blink. The answer was, "No." There was no explanation.  Her point was clear -- her answer was not open for discussion.

The second woman's story Lydia forwarded to me. When her family arrived in Auschwitz she and her twin sister were selected by Dr. Mengle for experimentation. She never saw her family again. It is almost certain they were killed in the gas chambers.  Her time in Auschwitz was horrific, but she and her sister survived.  In the 1980's, her sister was dying from kidney failure tied to the experiments at Auschwitz.

She gave her sister one of her kidneys, but she needed more information to save her sister. She found a former Nazi doctor who worked for Mengle. When she met the doctor, she confronted him. He was tormented by what he had done.  She worked with him and publicly forgave the doctor and the Nazis. She even returned to Auschwitz with the doctor.

I was struck by the two women and asked myself if I could have forgiven the Nazis if I shared their experiences.  Honestly, I don't know. I know what I should do as a Christian, but I have not walked in their shoes. I only hope I would have the strength to do as the second woman.

To be precise, it wouldn't be my strength. Would I be able to forgive with God's strength?  Again, I don't know.  I considered this while preparing to preach on Sunday.  I asked myself, what could I teach the refugees on forgiveness? They have been through so much. Because they converted to Christianity, they will be persecuted or killed if they return to their home country. They need to forgive those who have wronged them, and they have much to forgive.

I began by discussing the Holocaust -- I wanted them to understand what happened.  Next, I spoke of my trip to Auschwitz and the stories of the two women. Then, we looked at the prophet Jonah. Jonah is a study of unforgiveness and God's grace. God told Jonah to preach in Ninevah, the capital of Assyria.  Jonah was deeply flawed. He was arrogant. He was bitter. So, Jonah ran from God. He swam with a big fish and got a ride in the right direction.  He ended up in Ninevah, his clothes and hair gone, digested by the fish.  It terrified the Assyrians, and they repented. Yet, Jonah hated the Assyrians. He was mad at God for caring about them. Jonah hated the Assyrians so much he would not forgive them no matter what God said, not unlike the first woman.

The second woman came to a different conclusion. Forgiveness was not only possible but it was better than unforgiveness. Why? What happened with her that was different? Jesus spoke often of forgiveness and its importance. One key example is from Matthew 6:14-15, Jesus' famed sermon on the mount.  Paraphrased, forgive others when they wrong you and you will be forgiven by God, if you don't forgive others when they wrong you, you won't be forgiven by God. Following this has to do with the state of the heart. In his Epistle to the Romans, the Apostle Paul called it being ‘circumcised in heart.’

I closed with a more practical aspect of forgiveness.  It is good to say we should forgive our enemies, but how do we go beyond mere words? Is forgiveness a feeling? An action? Is it both?  What do you do when you don't want to forgive? When you cannot muster the strength to do so?  Does forgiveness mean allowing an abusive person the opportunity to continue to be abusive?  To that question I would answer a definite "no". To the other questions, begin with prayer. Ask God for help. It is no surprise to Him that you are struggling. He will help you in the way you need most. Do not expect quick results, these things take time. Be persistent. It is worth it.  Decide you will forgive. Say it aloud. Say it in your heart and stick to it.

Stand United. One Mission. One Message Lydia and I are now back in Vienna, Ada returned a week ago, and I have a few observations:
It is good to be back.  Each year I wonder what God will do here and each year I am amazed by what He did do in the previous year.  God is good and I believe, with anticipation, that He will continue to do Great things in Vienna.  May God smile on each of you in the coming year and bless you and yours.

Bill
Posted by Unknown at 9:14 AM No comments:

http://pilgrimsprocess.blog/david/meet-david-bunce/
David is one of the pastors at our church. He does a very good job describing the church we attend and discussing his heart for ministry.
David is a Baptist pastor and missionary in Vienna, Austria. Originally from the UK, he now works with Projekt:Gemeinde (Project:Church) as well as being involved in the year-out bible and mission school Project:Vienna and the Austrian Baptist Union’s home mission.
Posted by Unknown at 10:06 AM No comments: 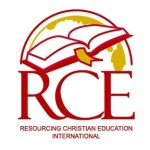 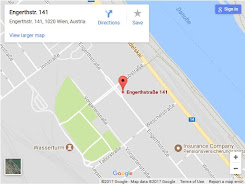 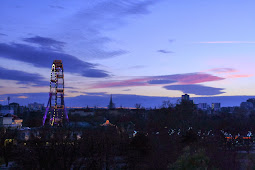